What a difference a week makes! It has only been 10 days since my original blog piece about Don Herron’s Tub Shots was posted to coincide with the opening of the Daniel Cooney Fine Art  exhibit. The article was then re-posted on Queerclick, while Out magazine posted their own piece about the gallery exhibit, as did numerous art photography websites and blogs. Each time I do a Google search, I find more information about Don Herron and his series of photos, which had very little internet presence up to this point.

The digital skeleton of the Village Voice even resurrected their feature from April, 1980. This is curious, considering a) The paper had been declared officially dead two weeks ago, and b) One of the subjects in their 23 photo spread sued for invasion of privacy when it was published the first time, claiming that the model release form was forged.

Some alternate pics have surfaced of the two most ubiquitous Tub Shots featuring Keith Haring and Robert Mapplethorpe: 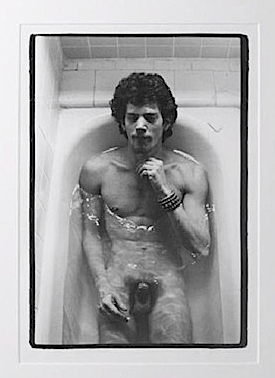 Here’s a little more info about some of the other luminaries featured in Tub Shots :

Robert Opel (1939-1979) was a conceptual artist, Advocate photographer and gay rights activist who achieved notoriety when he streaked through the 1974 Oscar Ceremony. He launched the first openly gay art gallery in San Francisco, where he was murdered in 1979. He is the subject of Uncle Bob, a 2011 documentary directed by his nephew Robert Oppel.

Actress Mink Stole is one of John Waters’ Dreamlanders and has appeared in all his films, most notably as Connie Marble in Polyester, Taffy in Female Trouble and Dottie Hinkle in Serial Mom. She also played Aunt Helen in all of the Eating Out films.

Cookie Mueller (1949-1989) was another John Waters Dreamlander who appeared many of his films, including Pink Flamingos and Desperate Living – her Tub Shot includes the poster for the latter. She also penned a column for The East Village Eye  and half a dozen books.

Victor Hugo (1942-1993) was a Venezuelan artist, window dresser and nightlife personality. Hugo designed window displays for his partner Halston‘s Madison Avenue store. He later became one of Andy Warhol’s assistants at The Factory where he worked on the oxidation paintings. As a model, he also appeared in Warhol’s Torso and Sex Parts series.

As the different subjects recount how they got involved in the project, a thread emerges: Robert Mapplethorpe brought in Felice Picano, who in turn suggested Victor Hugo and George Stavrinos, who then connected Mel Odom. (Read part 1 of this post for more on them)

eter Berlin‘s statement about Don Herron and his Tub Shots is exactly what you would expect from the legendary narcissist:

“He may have approached me for sex and then asked to take my photo. I have no recollection of him or the photo shoot.
At the time, I never cared for photos taken by other photographers, not even Mapplethorpe’s photos of me. I realized how critical I was looking at my image, so I probably would have seen this photo and not liked it. Looking at the photo now, I don’t mind it. It’s not a typical Peter Berlin photo that I would have taken of myself. I like everything but the dick and my expression in the face. But I have no recollection at all of him or this shoot.” 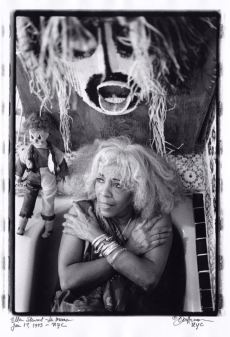 Congratulations to the late Mr. Herron on this recent rediscovery of his work. As artist Adam Donaldson Powell posted in the comments of Part 1: “…he deserves due credit now. His other paintings and silk screen art were even more impressive than Tub Shots. I would love to see that work praised online as well.” We shall see…